City Stories: The Guild of Freemen

Through our Guild Charity we have been giving in the City for more than a century. Today we have almost 2000 members, and by joining forces for CGD we can help to make even more of a difference, as well as thanking everyone for their continuing generosity.

We support The Lord Mayor’s Appeal charities working in the City and neighbouring communities. As the association for all Freemen of the City of London, one focus is on helping young people from all backgrounds to realise their potential through schools with links to the City.

We will be featuring CGD and inviting donations via our website at www.guild-freemen-london.co.uk, where people can also find information on applying for the Freedom of the City. We’ll be fielding Guild teams for the Treasure Hunt and Quiz Night organised by The Lord Mayor’s Appeal.

We are proud to support The Lord Mayor’s Appeal, which is creating a better city for all those in the Square Mile and neighbouring communities.

"We look forward to a wonderful day, celebrating all the giving in our great City."

Dorothy Newlands of Lauriston, Director, Guild of Freemen of the City of London 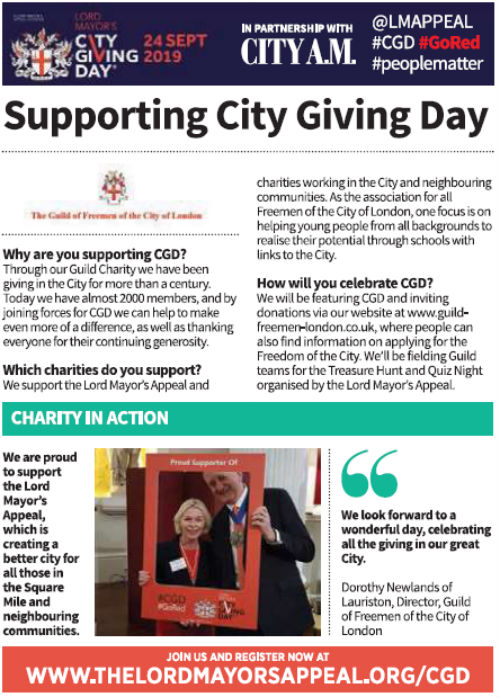 25 June Culture and Belonging: The Power of Storytelling

1 June She Can Be - Empowering young women for the future