We’ve supported City Giving Day from its start as a simple cake sale in Guildhall Yard during former Lord Mayor Fiona Woolf’s year. It has developed to showcase the four pillars of The Lord Mayor’s Appeal – an inclusive, healthy, skilled and fair City.

Mental health is one of the biggest issues facing the City and society. Supporting the Samaritans, which through The Lord Mayor’s Appeal has engaged with corporates as a way to maximise its reach and impact, which is crucial.

Engaging in the many activities available in the City, from the Treasure Hunt to the Long Long Lunch, as well as visiting the many companies raising funds for their own or The Lord Mayor’s Appeal. One day we’ll take up the Tour de City bike challenge but having seen what hard work it is, perhaps not this year!

“CGD is hugely inspiring as it showcases the City at its best. You see a human, engaged City, which uses its organisational and technical skills – and its competitiveness! – to build a better world.” 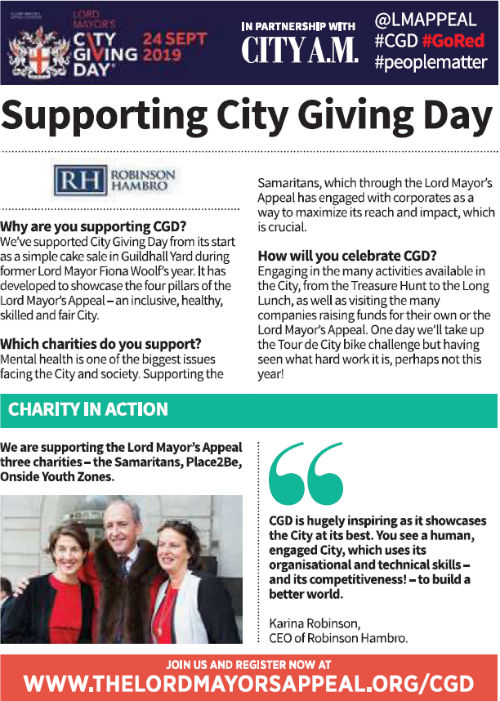 13 December First ever This is Me Summit

25 October Join us for our free This is Me Summit

3 October Register now for our This is Me virtual summit